Starting from Lanling Theatre’s small theatre space in a basement on Chang'an East Road, the Godot Theatre Company has increasingly accumulated energy with our creativity since the premiere of the first production The Zoo Story in 1988. With plays filled with humanistic qualities, we finally made it onto the stage of the National Theatre, and even crossed the Pacific Ocean to head to Vancouver and New York. We also toured over forty cities around Chinese-speaking communities. For the many years, the Godot Theatre Company has not only ceaseless dedicated ourselves to creating unique productions, but also never forgot our initial motive—we would like to use dramas to ignite hope in people’s heart.


During the late 1980s, modern drama was yet flourishing in Taiwan. Godot Theatre Company made its debut of The Zoo Story and showed the Taiwanese audience the strength of theatricality in a difficult situation. In its second year, Godot Theatre Company produced Lighting Counts Nine, Stand By, and thus took the first step in the direction of musical creations. In 1995, Godot Theatre Company collaborated with talents in different areas and produced a great musical, Cyrano de Bergerac, which not only marked the milestone of Taiwanese musical productions but also praised by the press as “the best stage production so far in Taiwan.” Along with Kiss Me, Nana, The Angel Never Sleep, A Mid-summer-night’s Dream, Sunrise and many other popular productions, Godot Theatre Company has built up its reputation in the world of musicals and expects itself to create a “Broadway in the East” in Taiwan.


Our plays suit everyone. We do not show off tricks or dazzle the audience. What we care about is that if our plays resonate with people. We have Little Town of Tamsui, which accompanies the audience’s three generation family to grow up. We also have Kiss Me, Nana and Love for All Seasons, which save the memories of our youth, affection, rebirth and diaspora. All of our productions are closely related to this land as well as the growth of the audience. For many years, the Godot Theatre Company has enabled the general public to approach theatre, enjoy theatre, get to know theatre, and in turn fall for all bright-colored performing arts. We have gradually become an indispensable part of life of the theatre buff. To extend the long-accumulated accomplishments, we need to push the theatre company to sustainable development. Therefore, we have established perfect division of labor, developed theatrical teaching, thrown ourselves into social service with theatre professions, carried out the program of History Alive to bridge the communicational generation gap, founded Godot Entertainment Media Limited to straddle films and television and spread the energy of dramas with another platform. With the all-round arrangements, we would like the audience to perceive our existence all the time.


Somebody had written in the media that “Godot is good in the sense that, although they produce so many different plays and musicals, with different themes and different styles, but they never forget about the people, the touching feelings and the passion.” It is this sense of mission behind us that makes us strong and persistent. Godot Theatre wants to bring to the audience the most beautiful scenes, the most profound thinking, the most unforgettable characters and we also want to bring Taiwan’s cultural point of views and the creativity and hard work of the Taiwan theater people for the world to see. Not only we want to provide people unwavering truth and passion in this time of changes and distress, we also want to become a modern theater group with international perspectives and bring to the audience more touching stories and sentiments. 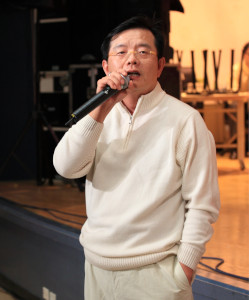 
One of Taiwan’s renowned and acclaimed playwright and theatre scholar Ma Sen once complimented James Chi-ming Liang on his accomplishment: Liang led the Godot Theatre Company to become “a window to theatres around the world” for theatre in Taiwan.


Liang founded the Godot Theatre Company in 1988. In 1993, he obtained scholarships from Council of Fund Management for Cultural Affairs and Asian Cultural Council to study theatre directing in New York. Afterwards, he was committed to creating “exquisite dramas” and “Chinese musicals.” Up to now, he has written and directed over 70 plays, and devoted himself to promoting drama and theatre education. He taught at the Department of Theatre Arts in the Taipei National University of the Arts, and is currently the professor in the Graduate Institute of Performing Arts in the National Taiwan Normal University.


Liang directed a great number of plays and musicals. With regard to plays, Liang re-interpreted Thornton Wilder’s Our Town many times and became one of his landmark plays. This play perfectly combined the text with Taiwanese local culture and moved tens of thousands of people. In 1994, the adaption of Shakespeare’s play, The New Taming of the Shrew, successfully transformed the theatre into a space filled with dreams and pleasures to provide visual and audio enjoyment for the audience. Many of his later plays were also intertwined with the then social trends, such as productions based on foreign plays, including The Complete Handbook of Reaching Happiness, Communicating Doors, and Black Comedy, as well as that adapted from Jin Yong’s Wuxia masterpiece Chyao Fong, the End of Destiny. They broadened the horizon of the audience and stimulated people to reflect on their lives.


As for his musicals, in 1995, Liang directed Taiwan’s first full-scale and large Chinese musical Cyrano de Bergerac. This trail-blazing production pushed the limits of theatrical technologies and creative talents in Taiwan, stunning the audience, media and theatre critics. In 1997, Taiwan’s first rock musical with a live band Kiss Me, Nana was produced. It disrupted Taiwanese audience’s concept in theatre and received overwhelming response. In 1998, the Latin musical The Angel Never Sleeps made the record of the highest-attended performance in a single show, winning the first prize of the top ten performances selected by China Times, the Crystal Ball Awards for the Best Production, the Best Director, and the Best Leading Actor. Later, Liang kept creating many well-liked Chinese musicals, such as A Midsummer Night’s Dream, which was a mixture of eastern and western music, the first original musical Sunrise, and classic musical consisting of extensive repertoire of popular old songs, Shanghai Love Songs. These musicals characterized the Godot Theatre Company as the representative of Chinese musicals. Liang also became the most influential driving force for the flourishing development of Taiwanese musicals.


Liang received numerous awards. He won the Professional Elite Award from Rotary International. The album Thanks for the Music─ Wonderful World was nominated the 20th Golden Melody Awards for the Best Lyricist and the Best Crossover Music Album. He was also awarded the first Outstanding Alumni Prize by Taipei National University of the Arts in 2007 owing to his creative and educational accomplishments. He was a winner of the Best Director for Chinese Literary Awards in 2012.

His latest musicals include The Most Beautiful 5 Minutes in My Life, Green Island Serenade, Kiss Me, Nana, Love Ya Mom, Mountains and Seas, A Musical: CHEN Cheng-Po’s Life, Hello Dolly, etc. His recent plays include My First Wives, Mr. Right Wanted, ART, U, Brother?, Love for All Seasons, Our Town, Running Angel, Daddy Nanny, At Home at the Zoo, Soliloquy, Nighthawk / Nocturnal Wanderer, etc.


Other than theatrical productions, Lin has also dedicated herself to a variety of businesses regarding dramas. She established the Godot Entertainment Media Limited, developing cultural and publishing industry, as well as productions of films and TV dramas. Hopefully, it will become the universal platform for Chinese creative talents. Lin also contributed to the foundation of Shanghai Baiting Cultural Communication Ltd., introducing Taiwanese theatrical productions into China and facilitating the cross-strait communication on performing arts.


Her production credits include: